The country’s swing toward progressiveness is encouraging, but could use improvement, leading Tunisian feminists say.

After enduring decades of dictatorship, the country credited with sparking the Arab Spring is shedding light on thousands of allegations of rape, torture and beatings at the hands of state authorities.  Tunisia’s women  and men are telling their stories as the North African nation reconciles with the past while looking to the future in a very public project called the Truth and Dignity Commission, which has received 62,000 allegations of abuses that happened between 1955 and 2013.

The rapid transition from dictatorship to democracy isn’t easy. But early into Tunisia’s democracy women are taking the leap into political action.

Ben Amar is a professor at the universities of Carthage and Tunis El Manar, working in the fields of applied sciences and technologies, and mathematics.

“Women are increasingly becoming more involved in the political process because there is a strong feminist movement in Tunisia, men and women who push the reform of the laws towards equity in citizenship, equal opportunities and the lifting of discriminations against women,” Amar told Rights Universal from Tunis, the country’s capital.

“In the new constitution, the feminist movement and progressive parties – the real ones – have succeeded in constitutionalising gender equality and parity in the elected structures, even if today it is not perfectly the case,” she continued.

Head shot of Nihel Ben Amar, courtesy of her.

Tunisia was the flash point in what became a years-long upheaval of unrest sweeping across the Middle East and North Africa, with leaders toppled – despots and elected officials alike. Syria, Libya and Yemen remain in the throes of instability and deep conflict.

For nearly 60 years, Tunisia was ruled by just two men,, whose state police and paramilitary forces were instruments of brutality, Tunisia is coming out of the dark and into the light.

In 2011, Tunisia’s Jasmine Revolution sprang to life after Mohammed Bouazizi, a 26-year-old man eking out a living for his family selling fruits and vegetables in the city of Sidi Bouzid, set himself on fire after being beaten by police, who took his electronic scale and dismissed his demands for accountability.

At the time of Bouazizi’s self-immolation, no women served in the nation’s parliament. As of December, 68 women were serving in the nation’s single-parliamentary house. That’s 31.3 percent of the seats in parliament that are held by women, based on the country’s 2014 election results. .

Some of the credit surely belongs to Ben Said, who founded Aswat Nissa (“Voices of Women”), which trains female candidates to run for election and more.

“We have three main objectives that we want to achieve in the coming five years: supporting champions for gender equality, gender mainstreaming and a 21st Century feminist movement,” Ben Said told Rights Universal from Tunis. “Even though our constitution is a quite progressive one, Tunisia had to continue the work on extensive reforms to bring its legislation in line both with the constitution and international standards.” 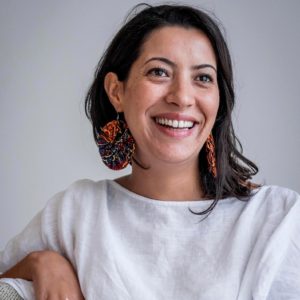 Head shot of Ikram Ben Said, courtesy of her.

“So there is a long way to go to be really a progressive country that respects everyone’s rights and the feminist movement should and could be on the frontlines,” Ben Said emphasized. “When I want to see if a country is a progressive one or not I always see how they treat women and minorities. Having said that, I consider that Tunisia is not a progressive country yet.”

Still, there is no equivalent in other Arab and Muslim countries to that of Tunisia’s female empowerment structure, according to Ben Amar, though she agrees there is much work to be done.

“The proof is the mass gathering of citizens on August 13, 2012, which destroyed the project of the conservatives … to make the woman complementary to the man,” she said. “The street decided she should be equal to the man and that is how it appears in the new constitution. We are now working on political rights. In the texts, they exist, but (not necessarily) in practice. This is not satisfactory.”

So the work carries on.

Both women agree feminism in a Muslim country – traditionally patriarchal – is a leap forward. Now the trick is to inspire future generations of girls and young women to be involved.

Ikram concluded, “Once my sister asked me, ‘Ikram, how did you become a feminist?’ I told her I never decided to be a feminist … It was a normal reflex to resist the discrimination I face as a woman – it was the only way to say hey I matter.”

Les has a special interest in researching and writing on human rights issues in developing and industrialized nations around the world. His extensive experience includes foreign correspondence from Africa, Asia and the Middle East and has written for the New York Times, the Los Angeles Times, the New York Post, the Washington Post, AP, AFP and has been published in The Columbus Dispatch, the Boston Globe, The Daily Gazette, Digital Journal and Images & Voices of Hope. Follow him on Twitter at @LesNeuhaus.

Video: Is going to school and getting an education important to children in Syria?